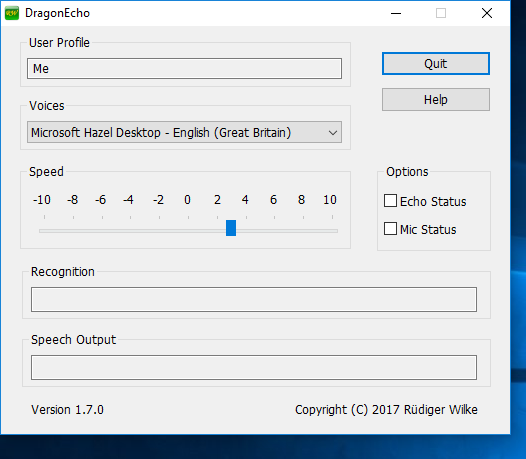 DragonEcho is an assistive tool which has been developed specifically for low-vision, or no-vision users, or more generally for complete eyes-free use of Dragon.

Its core functionality is to automatically and instantly read back everything that Dragon recognised, no matter where it has been dictated, and with no further action involved.

The overall purpose is to give a verbal feedback to the user as to what happened on the screen. Once started, DragonEcho will run in the background and the echo function can be turned on and turned off quite easily, via voice commands, or keyboard shorcuts.

The read-back functionality has been facilitated by using the Microsoft TTS voices, which are already installed on the computer. Adjusting the voices, such as selecting another voice, or readjusting the rate of the voice, can be done on-the-fly with voice commands also, at any time.

DragonEcho has some more optional features, such as giving a verbal confirmation whenever the microphone state is changed, or announcing the current state of the microphone when pressing a keyboard shortcut.